Some time ago, I wrote that I needed to be less of a scaredy-cat about git (in particular so as to get back into KDE development, and the rat's-nest of git repositories there was scaring me off -- in that sense I'm a data point in what Paul Adams is writing about). The best way of learning is by doing, so I looked for something to do with git that would basically force me to use it regularly.
That really means "find a way to use git at work-work", since most of my development hours happen there now (largely administrative number crunching in Python).
A bit of background: at work-work we have a central SVN repository. It has a non-standard naming scheme: trunk is called development, and branches are in the releases subdirectory. The only branches are for actual releases. For various reasons we are also using SVN 1.5, which means that we don't have any of the more-modern merge and branch features that SVN has grown. So feature work by the developers happens in trunk directly, not in feature branches, and we end up with some pretty confusing history of interleaved commits.
I have 38 minutes on the train between Arnhem and Utrecht that I could use effectively for development of small things: typo-fixes, message improvements, adding unittests, that kind of thing. But I don't want to end up with one big set of changes for all the little things I do on the train; I want sensible commits of one logical change after another.
So basically I want simple feature branches and offline commits. It needs to linearize history and integrate with a weird SVN setup. Previously I used Mercurial and its hgsubversion extension to get this effect; now I wanted to do the same with git, for learning purposes (and then I can futz with the KDE repositories again).
Most of what I eventually built to give me a nice git-based workflow that meshes with the central SVN repository is based on a series of blog posts
from TF Nicolaisen. They were really useful.
Anyway, my workflow now looks like this:
That's a cromulent git workflow, and except for excessive rebasing and the push to SVN at the end, usable for regular git work as well. 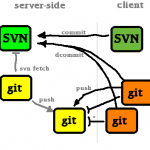 The setup I've ended up with is illustrated here; on the server side, there are three repositories: first is the central SVN repository. This is the official and canonical source and other developers commit to SVN normally. Then there's the git-fetch repository, which pulls revisions from SVN and puts them into git commits. This one has only the SVN commits in it. Third is a bare git repository, which is where I pull from and where the fetcher repository pushes things. This bare repository also has a few things that are not from SVN commits -- I push branches here if I want to share them over git with other machines I work on, and there are a few tags in it marking some events in the history of the repository.
Client-side, there's whatever clones I make of the bare repository.
Getting this set up was a matter of configuring and cloning the right bits; this I mostly did by following the steps described by TF Nicolaisen, except that I needed to get the authors map just right ahead of time, and I'm only git-bridging one single branch from SVN (namely, development, which is our trunk), and I'm not interested in ancient history (which is gnarly), but only fairly-recent commits from SVN. So here's what I did:
At this point, every SVN commit gets pulled into the fetcher-repo by the git-svn code and then pushed into the bare repository as if it's a normal git repo. The server side is done. One the client side, I set up ssh access to the SVN (and now git, too) server. Then getting a correctly configured client-side clone is as follows:
And with that, I've got a usable git clone that I can use for feature branches on the train, and that can easily push back to SVN. After using this for a few months I've finally gotten comfortable enough with git -- feature branches, and sometimes futzing aroud to massage history into a usable form, and dealing with the rest of the git tools -- to touch KDE git repositories again.