Today I had to repair my most important debugging tool. Here's the result: 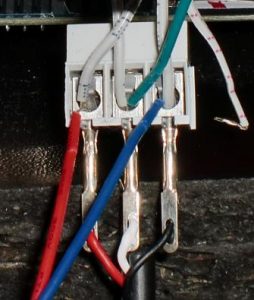 That's three strands (red, white, black) from a USB-to-serial converter, soldered on to a 3-pole screw-tightened connector. Clamped into that are the serial lines (red, green and blue) which were originally crimped straight to the lines. After a few months of use, the crimping failed and the red cable (RX) broke off.

So I had to fix it, and in the process decided to make it more sturdy, more ugly, but also easier to use.

The three grey wires clamped into the connector are part of a 10-pin flat cable which I scavenged out of a 9-pin serial connector I had left in the box-of-old-parts.

The flatcable, and especially the 10-pin connector at the end, is nice and sturdy for connecting to the headers on single-board-computers, like here: 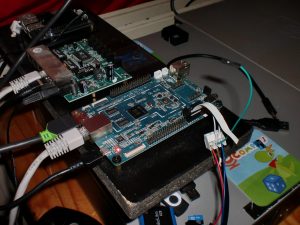 That's why I need a serial cable for debugging. The frontmost board is a Pine64+. It runs FreeBSD and Linux; in Linux it will drive a full Plasma 5 desktop at FHD and acceptable responsiveness; FreeBSD is limited to serial console and ssh access. I use this board to test aarch64 support in FreeBSD and to test our KDE-FreeBSD packages on yet-more-unusual platforms. This turns up occasional issues in KDE code.

(The other two boards are a switch I had left over, and there's an Odroid C2 at the back; together they form my little ARM rack, along with two planks they're screwed on to and a power supply. Did you know the Palm m500 used the same size barrel jack for power as the Odroid C2? Yet another reason to keep old parts lying around.)