I've learned that IBM Travelstar 40GB drives use glass platters. I learned this the fun way, by bending one in a vice, with a big set of pliers. It went snap, tinkle -- a different sound from other drives. And after that the bendy drive was usable as a maraca!

So why was I bending drives in the first place?

Well, I volunteer some of my time at a local second-hand place called Stichting Overal. It is an "idealistic" organisation that uses the revenue from second-hand sales to support various projects (generally small-scale development, like funding the construction of sanitation in schools). Like most second-hand stores, there's clothes and ancient kitchen appliances and books and used bicycles .. and also an IT corner.

I help out Tom, a local school kid who has run the IT corner for some time. From time to time a PC or monitors or random IT crap is dropped off for re-use, and we apply triage. Yes, that is a lovely 486DX2, but it is still going into the bin. For various reasons, there's a mismatch between supply and demand of hard drives: we end up with piles of small ATA-33 drives, and very few 80GB-or-more SATA drives.

Machines that show up and not immediately consigned to the bin are thoroughly cleaned ('cause, eww). Some machines are cannibalized for parts for others. Working, usable hard drives are wiped, and then re-triaged. Since we don't want to leak whatever data is on the drives (even after wiping, and customers aren't always all that careful about what they bring in either), leftover drives are destroyed.

So that's why I was contorting a laptop drive. Here's a Christmas ornament I have made out of a desktop 3.5" drive. 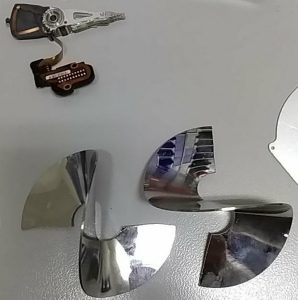 Machines that get through this gauntlet are dd'ed with zeroes, then installed with some flavor of GNU/Linux. Even if there's a valid Windows license attached to the machine, getting that installed correctly and legally is way more effort for us than doing something we know is right (and Free). Lately it's been Fedora 27 with rpmfusion, and a KDE Plasma 5 desktop (I didn't do the choosing, so this was a pleasant surprise). Frankly, I'm not convinced we're doing a really good job in delivering the Linux desktop PC experience to the buyers, since there's no Linux / Fedora documentation included (now I write that down, I realise we should probably check if there's licensing obligations we need to follow up on). What it kinda needs is an OEM installer to do some post-sale configuration like setting up a user (I can think of at least one).