It was summer, and the sun was shining, and I had posted that Calamares was going to sleep for the summer, so then I went with my family to bicycle in Denmark.

Route to (light green) and from (dark green) Møn. Map image from OSM.

We took the train to Flensburg, and headed east. Lots of ferries on the way, and at the wonderful Edible Campground on Ærø we found three messages-in-a-bottle. Denmark has mørk pålægchokolade, which is great for breakfast and lunch but needs to be purchased daily because it melts and sticks together (and four people can eat a lot of chocolate). In the 28-degrees-and-sunny weather we drank ¾ litre of water per person per hour of bicycling -- getting enough water meant planning stops a little more carefully. 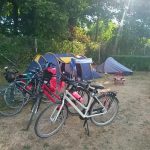 On the way back we went through Germany, where "moin" is the standard greeting and the Aldi has white wheaties (breakfast of bicyclists). We camped in the Hüttener Berge, which was beautiful and quiet -- previously I only knew about that area as "the last rest stop on the Autobahn before Denmark" which is neither beautiful, nor quiet.

And now after 710km on the bike I'm back in the Netherlands, preparing for Akademy and gently poking Calamares to see if it will wake up from slumber.