Calamares is a Linux system installer (and some day, a FreeBSD system installer, but that is a long way off) which is distro- and desktop-independent. OpenSUSE Krypton is a live CD and installer for the latest-and-greatest .. but it already has an installer, so why try Calamares on it?

Well, sometimes it's just to show that a derivative could be made (there is one, called GeckoLinux), or to experiment with tools and configurations.

Calamares has a script called deploycala.py, which like every gaping huge security hole is expected to be downloaded from the Calamares site, then run. It is recommended to only use this in a VM, with a live CD / ISO image running. What the script does is install a basic dev environment for Calamares, install up-to-date dependencies, and then it builds and installs Calamares. That then gives you a way to experiment, installing with Calamares from an already-set-up live CD.

The deploy script supports many different package managers and host systems, so it's just a matter of running python3 deploycala.py -n to get started (and then wait for a while as packages are installed, Calamares is cloned, and then built). Calamares builds with no issues on Krypton (at least today, when I tried it). 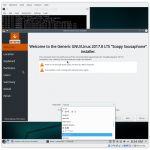 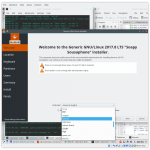 Having built Calamares, there's a few bits I notice:

So, by briefly switching distro's today, I've found one bug of my own, and one configuration thing for myself to document. And then from this not-using-Calamares distro, I can move on to another one.