For a long time, my Beagle Bone Black  sat on my desk, gathering dust. Recently I decided I would give it a purpose: as a replacement for the crappy DHCP server and DNS on my home router (it's a Huawei g655d, and it has poor wireless range, a lousy interface, and wonky internal DNS). I ran an update on the Bone, which promptly downloaded a whole bunch of packages from the angstrom distribution. Over plain unauthenticated http. With, as far as I could see, no further checksumming or anything. Bad doggy. 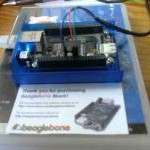 Resigned to replacing the on-board distro anyway, I decided I would try FreeBSD, since that's my OS of choice -- if it didn't work out, OpenSUSE would do.

Anyway. I wouldn't be writing this if there weren't a whole bunch of giants on whose shoulders I could stand, since actually, the whole process was deceptively simple and well-documented.

Hardware Setup: Here's a picture of my Beagle Bone, on an old DVD-case.

I started from the FreeBSD Beagle Bone wiki page. I power the Bone over USB from a powered hub. There's a Olimex 3-pin serial cable attached. I spent a frustrating hour with this until I read somewhere that sometimes the TX and RX wires are reversed -- so I swapped red and green and voila! You can see that in the picture.

Here's part of the boot messages:

The FreeBSD image for Beagle Bone expands to fill the SD card, so I have a nice 8GB drive with a basic FreeBSD installation -- hardly any different from when I create a fresh FreeBSD VM in VirtualBox.

Software Setup: then I tried to compile something. There are no binary packages generally available for ARM targets from FreeBSD, but you can compile everything from FreeBSD ports, no problem. Except after about 40 minutes waiting on the very first port that needs to be done, pkg(8), I was about to give up on this path.

At that point, Ralf Nolden asked something that totally turned this little project around: why don't you use poudriere for cross-compiling?

I'll point to Randy Westlund for a simple and straightforward recipe. No need to repeat it here, since the only difference between my setup and his are a few minor filesystem path changes. Randy points at Doug and there's more pointers from there if you want to follow the historical references. Giants.

Suffice to say that poudriere is awesome.

Really. Follow Randy's "Installing the Tools" steps, take the required modifications
to poudriere.conf from Doug, then continue with "Build the Environment".

On an i7 860 @2.8GHz, this took less than an hour, if I recall correctly. Maybe an hour and a half, which gave me time to read the documentation on other bits and pieces.

I picked a few packages -- isc-dhcp42-server and unbound -- and kicked off a poudriere build. I turned off all the DOCS and EXAMPLES options, since I can get those on the build host and they don't need to be on the Bone. From the extensive logging poudriere produces, I can see that it took a little over an hour and a half. For an overnight build, that's cheap.

And then the moment of truth:

So there you go! FreeBSD and ARMv6 packaging is as easy as pie. Now the Bone is doing something useful, I can start using poudriere for silly things,
like building Qt5 so I can write a Qt application to control the user LEDs on the board.