It's been quiet from the KDE-FreeBSD folks for a bit, but not because it's actually been quiet. Tobias has been on a roll, and Dima has started doing stuff again, and Gleb is still watching over some ports, and Raphael is hovering over it all with good advice. So here's some bits and pieces:

Some time ago I mentioned a branded wallpaper for FreeBSD, based off of the Flying Konqui wallpaper -- which in turn I had mentioned in February. Anyway, here's a screenshot of the if-it's-up-to-me default wallpaper for Plasma 5 on FreeBSD. It's running in VirtualBox, which is why KInfoCenter reports an interesting resolution (KInfoCenter has also been expanded with a lot better data on FreeBSD hosts, so that it reports sensible memory use, and sensible disk usage). 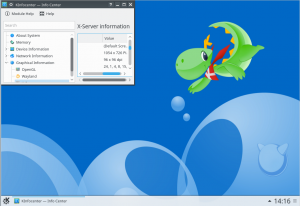 On the official ports front, KDE Frameworks 5 have landed. All except Wayland -- which requires a Wayland port to build against, and that is currently in the almost-but-not-quite state from the FreeBSD graphics developers -- and Bluez -- which is just hopeless with the FreeBSD bluetooth stack. So that layer of the stack is now complete, and we follow KDE Frameworks releases closely.

Next bits, like a Plasma 5 Desktop, are lined up in the plasma5/ branch in area51, and there's some work being done in FreeBSD Phabricator, but don't hold your breath.

In the mean time, we're also pushing things upstream (i.e. into KDE itself) a little more often. Also through Phabricator -- KDE Phab this time. So every now and then I end up with tasks or reviews in the one system that belongs in the other, oh well. Generally I really like the workflow with Phab. Certainly now I've found the "add reviewer" button. I'll give the Krusader folks a shout-out for dealing really quickly with issues raised through Phab, and Dima thanks for the original patches.

So all in all: KDE Plasma 5 Desktop is moving along, with two layers of the software stack to go before there's an official modern-KDE-desktop available on FreeBSD; one layer is already available for modern-Qt-based-applications. KDE4 is receiving some attention as well -- I see there's a KDevelop 4 release I should chase down.