KDE's CI system for FreeBSD (that is, what upstream runs to continuously test KDE git code on the FreeBSD platform) is missing some bits and failing some tests because of Wayland. Or rather, because FreeBSD now has Wayland, but not Qt5-Wayland, and no Weston either (the reference implementation of a Wayland compositor).

Today I went hunting for the bits and pieces needed to make that happen. Fortunately, all the heavy lifting has already been done: there is a Weston port prepared and there was a Qt5-Wayland port well-hidden in the Area51 plasma5/ branch.

I have taken the liberty of pulling them into the Area51 repository as branch qtwayland. That way we can nudge Weston forward, and/or push Qt5-Wayland in separately. Nicest from a testing perspective is probably doing both at the same time.

I picked a random "Hello World" Wayland tutorial and also built a minimal Qt program (using QMessageBox::question, my favorite function to hate right now, because of its i18n characteristics). Then, setting XDG_RUNTIME_DIR to /tmp/xdg, I could start Weston (as an X11 client), wayland-hello (as a Wayland client, displaying in Weston) and qt-hello (as either an X11 client, or as a Wayland client). The result is this: 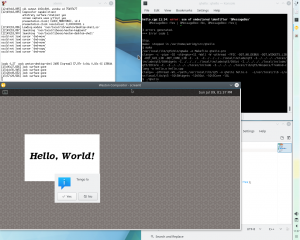 Plasma 5 Desktop from Area51, with Weston running in X as a Wayland compositor, and two sample Wayland clients displaying in Weston.

So this gives users of Area51 (while shufflinig branches, granted) a modern desktop and modern display capabilities. Oh my!

It will take a few days for this to trickle up and/or down so that the CI can benefit and we can make sure that KWin's tests all work on FreeBSD, but it's another good step towards tight CI and another small step towards KDE Plasma 5 on the desktop on FreeBSD.