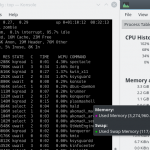 KSysGuard -- the system monitor -- on FreeBSD seems oddly precise. This machine with FreeBSD 10.3 and KDE Applications 17.04.2 installed, tells me that I have 3,274,960.000000 KiB memory in use. That is, three million, two hundred seventy four thousand, nine hundred and sixty kibibytes. I'm willing to believe that, since notionally the machine has 4GB installed and FreeBSD uses up memory until it's full and so memory use rarely reports much unused. What I'm less inclined to believe is the .000000 part of the measure: and zero millionths of a kibibyte. So that's a .. um .. more than a millibyte, and a smidgen less than one one-hundred-twenty-secondth of a bit.

So, dragging in some information theory and plugging in some values,  using the binary entropy function, Wolfram Alpha tells me that

so we can be ninety-nine point nine percent sure that that is my actual memory use.

Sometimes it's good to be precise.