Yesterday I picked up my new KDE Slimbook. It comes with KDE Neon pre-installed. Of course it also works well with openSUSE, and Manjaro, and Netrunner Linux (some things I've at least booted the Live CD for). But for me, "will it run FreeBSD" is actually the most important bit.

Yes. Yes it does, and it does so beautifully. 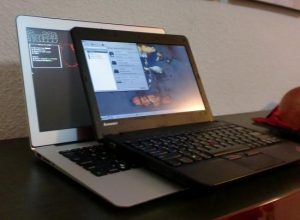 That is at least one advantage of choosing a Free Software friendly laptop, one designed for GNU/Linux: it is likely to be supported by many more operating systems that you might like. No, I have not tried OpenSolaris / Illumos on it .. there's really no desktop distro in that corner anymore.

So, here's how to upgrade your  Slimbook to FreeBSD (no warranty implied):

This concludes my laptop-futzing-about at Akademy this year: I have a laptop that dual-boots Linux and FreeBSD, and gives me an up-to-date Plasma 5 Desktop and KDE Applications on both -- but that leaves me free to hack on whatever my work requires in the OS best suited to it each day of the week.