Not goodbye, but hello to a new music player on my desktop. It is already packaged for FreeBSD and has a long development history.

Music players stand or fall per individual user whether they satisfy the user's needs -- no duh there, but it means I should note what my use cases are before enthusing about some music player in particular. I would be fine with playing music from the command-line, most of the time: mpg123 --shuffle /mnt/music/*/*/* is just about right (except it fails with an argument list too long error in the shell). This is for music-while-I-hack, so I don't listen too closely, it's not hi-fi at all, basically I want "play in a genre until I switch it off". Tagging is largely done when ripping my CDs (I still buy physical media!) and I don't care for album art (I can look in the jewel case if I want that, and they're all stacked in boxes upstairs). So play, pause, stop .. and if it can avoid mixing Mahler with Morrissey and Mötorhead, that's a bonus. 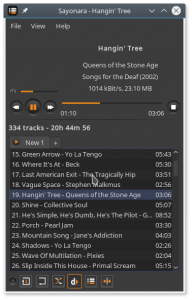 Off to the left here is Sayonara, which describes itself as:

"Sayonara is a small, clear and fast audio player for Linux written in C++, supported by the Qt framework. It uses GStreamer as audio backend. Sayonara is open source and uses the GPLv3 license. One of Sayonara's goals is intuitive and easy usablility. Currently, it is only available for Linux."

Clearly that's not true, because it's available for FreeBSD as well :) . I forget how I configured it; there's a File > Open Directory entry and I probably filled in /mnt/music and it went and found everything that gstreamer will sensibly play. The screenshot is of the minimal playlist-only view. It can be broadened to include a library view which is a bit chaotic, but which searches reasonably well (e.g. for Mudhoney). Sayonara is actually where I discovered the luxury of stay-on-genre autoplay: when I started on some Dutch punk and it kept pretty close to that, wandering off to de Kift occasionally -- but no Drs.P.

I contributed a few small fixes to get Sayonara building on FreeBSD, cleaning up the CMakeLists for newer CMake, that kind of thing. Now that it runs on my Plasma desktop all day, I can spot some more  minor issues -- the system tray media player control doesn't interact with Sayonara at all, for instance. For my use-case, that's not so important, since the fire-and-forget genre play does it for me until I hit pause in the main UI.

I'm looking forward to KDE music players Elisa and Babe, for comparison purposes: maybe they tick my requirements-boxes just as well, or better. Certainly Elisa seems to be fairly playing-music-focused. I've even got a FreeBSD port for Elisa ready, just waiting for Qt 5.9 to show up on my doorstep (I can get it to compile against 5.7, but it won't run due to QML runtime thingies).