Most of my writing on this blog is about FreeBSD, KDE, or Calamares. So it gives a bit of a one-sided view of what I do. There's lots of pictures of rhubarb crumble, for instance, that never see the bloggy light-of-day. But I can build more than just software! Two months ago an unusually heavy storm blew down part of the fence in my back yard, which wasn't really good for the privacy of that yard.

I could pretend this fits into the KDE privacy goals, but really I just want to show off that yes, I can dig post holes, cut lumber, hammer and fasten. While doing so I also found tomatoes, cilantro and dill growing in the yard like weeds, so that's a bonus.

Since Daniel Nicoletti keeps writing about Cutelyst, I took a stab at a FreeBSD port, since web-frameworks should be plenty portable. Well, except for the logic failure that UNIX AND NOT APPLE means LINUX. After a half-hour or so of trying to get FreeBSD's libepoll-shim to be used, I noticed that the shim API is incomplete, so I just punted LINUX out of there. After a minor code update to deal with implicit includes, I've got a port file for it that needs some polishing for porter's-handbook compliance. Expect Cutelyst in the FreeBSD ports tree within a few days.

Atelier and AtCore are active, so here's a blue-blobs picture of what's going on (since january). Plenty of commits from the core developer, and some incidental contributions. Lays is less visible in the contribution blobs recently, but that's probably because of fun Free Software events. 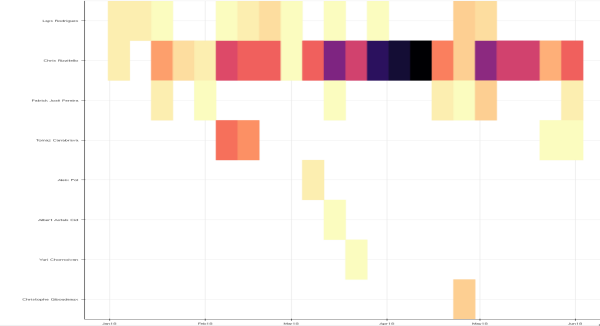 So that's what everyone else has done (well, some of everyone else; I'll leave broader coverage to Nate). Next week, come back for bicycle repairs and Calamares releases.