Elisa (product page, release announcements blog) is a music player designer for excellent integration into the KDE Plasma desktop (but of course it runs everywhere, including some non-Free platforms). I had used it a few times, but had not gotten around to packaging it. So today I threw together a FreeBSD port of Elisa, and you'll be able to install it from official packages whenever the package cluster gets around to it. 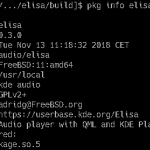 I say "threw together" because it took me only a half hour (most of that was just building it a half-dozen times in different ways). The Elisa code itself is very straightforward and nice. It doesn't even spit out a single warning with Clang 6 on FreeBSD. That's an indicator (for me, anyway) of good code. So if you want more music on FreeBSD, it's there! (And the multimedia controls work from the SDDM lock screen, too)