The KDE community’s large software product releases – Frameworks, Plasma, and Applications – come down the turnpike with distressing regularity. Like clockwork, some might say. We all know Plasma is all about clocks. 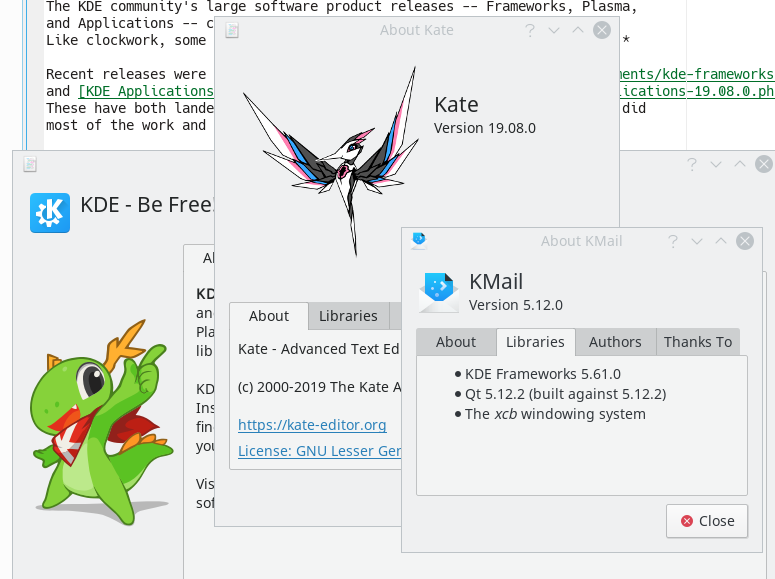 Recent releases were KDE Frameworks 5.61 and KDE Applications 19.08. These have both landed in the official FreeBSD ports tree, after Tobias did most of the work and I pushed the big red button.

Your FreeBSD machine will need to be following current ports – not the quarterly release branches, since we don’t backport to those.

All the modern bits have arrived, maintaining the KDE-FreeBSD team’s commitment to up-to-date software for the FreeBSD desktop. The one thing we’re currently lagging on is Qt 5.13. There’s a FreeBSD problem report tracking that update.

As usual, pkg upgrade should do all the work and get you a fully updated FreeBSD desktop system with KDE Plasma and the whole bit.

Since Akonadi functions as a cache to my IMAP server and local maildirs, and I don’t keep any Akonadi-style metadata anywhere, my solution was to move the “old” akonadi dirs aside, and just let it get on with it: that means re-downloading and indexing a lot of mail. For people with truly gigantic collections, this may not be acceptable, so I’m going to suggest, without actually having tried it:

I haven’t seen anyone else in the KDE-FreeBSD support channels mentioning this issue, so it may be an unusual situation.

The kio-gdrive port doesn’t build. This is an upstream issue, where the API in 19.08 changed but there’s no corresponding kio-gdrive release to chase that API. I can see it’s fixed in git master, just not released.

All the other bits I use daily (konsole, kate, kmail, falkon) work fine.