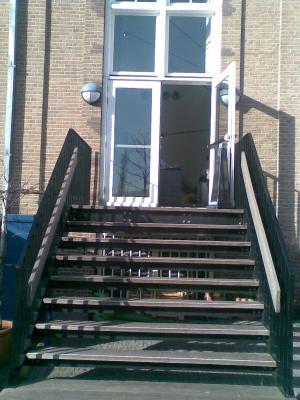 The third edition of the FTF's Amsterdam Legal Workshop is behind us. Two days of excellent weather (for Amsterdam in April, anyway), good food and in-depth legal wrangling on a variety of to pics. Like patents and how to work to defuse them for businesses and Free Software projects. Canonical kindly provided the nicest lawyer in Europe and a speaker who could rush 168 slides in 20 minutes, so their input is greatly appreciated as well. It was good to see friends from HP as well for the engineers-and-lawyers perspective.

Each year the event brings in new faces and new topics, and we've grown to the point where we have traditions and can afford a little bit of silliness amongst the serious talks and the networking and the hashing-out-of-issues-left-hanging-elsewhere. So near the end of the conference I got to hand out custard cream cakes of merit and one attendee asked me "so where's your pink whip?" That, though, would mean spilling too much KDE over into the FSFE, which is something that's not going to happen.

That picture over there is the group photo -- at least, the one I can publish, because I haven't cleared the publishing rights to pictures of the conference participants nor the (potentially copyrighted) images on their T-shirts. And of course, even a room full of happy lawyers should not be provoked.

Planning is getting underway for next year already -- that was my big failure this year, to get started early enough, so this is overcompensating a little -- and we're aiming for the same week of April, 2011 (say the 7th and 8th). Next year Easter is much later, so the workshop and the holiday clash less. Location to be decided -- if we're ever going to break free of Amsterdam, it needs to be done now.