So while y'alls were frolicking at Akademy (with Dot coverage), I was on vacation. The choice between vacationing with my family or attending Akademy was a tough one: we also spent some time looking into getting the whole family to the conference, but the price tag and "what will the kids do there" tipped the scales. Maybe next year Akademy will be somewhere that fits in my summer vacation and is amenable to cycling.

Anyway, I picked up an Asus Fonepad before leaving on the trip and left my trusty N900 behind. Battery life and screen real-estate were the motivations there, and I wanted only one device to take along. The whole "you'll look like a tool making calls with it, but it works" thing appeals to me as well. It's mostly a fine device and served its purpose well. I'll gripe about it elsewhere -- suffice to say that I'd be quite happy to have something other than Android running on the Intel Atom inside it.
I didn't use the Fonepad as a GPS tracker while riding around -- it spent most of the travel days neatly packed away, while an Amaryllo GPS logger (writes to an SD card) was strapped to the handlebars with a bunch of elastic bands.
The logger writes NMEA sentences to the SD card, which I convert to KML with GPSBabel (because the tracker is occasionally flaky and I leave it on all day, even when taking a nap in a ditch, I use a filter set to position,distance=10m,time=120 to compress the log). That gives me something that Marble can work with. I can import the tracks for each day (File->Open will read KML) and that zooms to the area I've biked through. After every load I need to switch off "places of interest" in the Legend tab, though, or I get a gazillion meaningless tags (numbered) cluttering the view. This may be an artifact of my KML generation; I'll have to look at the GPSBabel manual more closely some time. Once loaded, Marble's "export map" feature produces a nice PNG so I can show you where I went on my summer vacation: 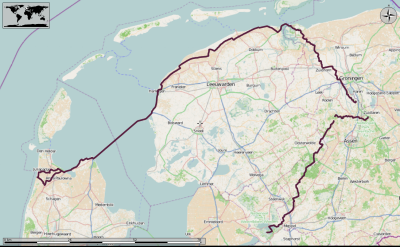 That's about 440km total, which the kids biked with nary a complaint (almost). There's gaps where the GPS flaked out or ran out of battery. Just to reinforce your preconceptions of the Netherlands: along the entire route it was flat, there were tulips, windmills and cows.
Another KDE angle, though: most of the trip I wore the KDE hoodie that I bought at FOSDEM -- blue and snuggly an warm it is, and emblazoned with a big KDE logo. At one campground, a dad sitting out front of his tent asked me, "hey, that K-thing, that's a Linux desktop, isn't it?" Bringing the number of times someone "in the wild" has recognized KDE stuff to two, for me. ("In the wild" means not a KDE person, not at a Free Software conference, and not a university CS student) So don't get the KDE hoodie for the recognition it'll get you in the train, get it to support KDE (and to be warm and snuggly).