Last week, Roman wrote about going to FOSDEM. Huh, so did I. And then, in a flash and a whirlwind, 8000 Free Software supporters descend on Brussels and leave again. After picking up the pieces and catching up on some sleep, here are my post-event impressions: 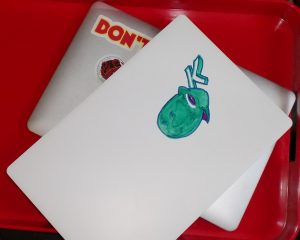 The cutest thing I brought back from FOSDEM is probably this Konqui Pinebook. The Pinebook is a low-cost ARM-based laptop, which runs KDE Plasma from an SD card I brought along. But a pure-white, totally blank laptop just cries out for some decoration! Timothée Giet was kind enough to use the permanent markers I'd brought for the booth, to create a one-of-a-kind Konqui Pinebook.

Underneath the Konqui Pinebook is my KDE Slimbook. Someone was handing out Nopetopus stickers; I wish I had gotten more. My Slimbook is starting to look a little beat-up -- which is good, from a Hitch-Hikers-Guide-to-the-Galaxy point of view, since it's been baked under the suns of Kakrafoon^WAlmeria, shivered in the snows of Allosymanius Syneca^W^WBrussels. At the KDE booth we were also could show a second-generation machine: the KDE Slimbook II (in Spanish, their English site doesn't mention it yet). A faster, brighter version of the Free-Software friendly laptop with Linux and KDE Plasma pre-installed. This generation is a little more angled / chunky than the previous generation. It might get fewer "why do you guys have Macbooks .. oh, hey" comments. So an aluminum but not-quite-clamshell look might be more distinctive. 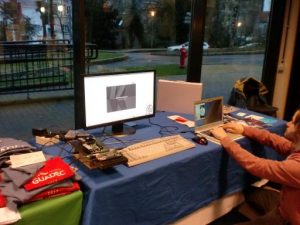 Early in the morning (as in, 8am on a Sunday) while setting up the KDE stand, things are calm. We had time to set out the ARM64 machines and FHD screen for the live Plasma demo on low-power hardware. Jos ran his Rust-Qt clock as well; full-screen it was rather laggy, but windowed it ran nicely while we experiemented with Firefox and KDevelop. Lots of people were mystified by the Sun type 5 keyboard, but by golly, that's where Ctrl belongs (next to the A). Speaking of keyboards, we got some heated comments, even from people looking for tall enter keys.

As always in building K, we were next to the GNOME stand, with whom we did a little trading game: they used our power bricks, we used their scissors. Big thanks to the guy in the purple GNOME jumper who helped me sort out firmware for the wireless dongle attached to the Pine64 board.

Building K ground floor has some venerable Free Software projects, the giant Free Software Foundation Europe stand, Operating Systems (the big three, Debian, Fedora, openSUSE, plus Gentoo, FreeBSD and Illumos) and also has a filesystems corner. I've since learned of the existence of LizardFS and MooseFS .. oh my. 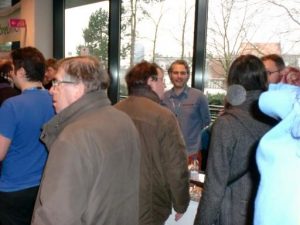 Once people start showing up, then the KDE booth is well-hidden. Here's Neófytos smiling through the crowds. We're not allowed to stick stuff to the windows behind the booth, so it can be hard to tell that there's a booth there. Something to solve next year.

We had people coming up to the booth with comments like "I love KDE! And activities, those are soooo useful", as well as "I love KDE! But I don't understand activities". Also "yeah, but I use xfce". There's room for all kinds of choices -- I don't use activities myself, but for some kinds of workflow they're really nice.

Speaking of activities, we had the pleasure of showing a painting activity. That's part of KDE's application story, and a few artists stopped by to show off Krita in particular. 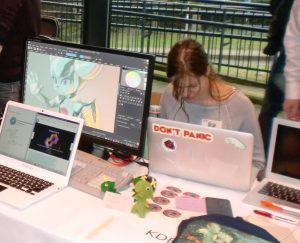 Here we see Wolthera hard at work at her tablet. She's not using either of the Slimbooks, but her own laptop hidden behind the table. The monitor is hooked up to the laptop, so it was a live painting demo. I wish my camera's autofocus worked better to do this justice.

In the early morning, it was charcoal sketching, which before lunch turned into full-color Konqui and Kiki as Paladins battling the forces of Evil. In this shot, Kiki is being lightly colored in (I'm a kolourpaint guy, I don't know what this stuff is called -- if it's not flood fill, it's too complicated). Because Wolthera was hidden behind the monitor, some people thought it was a recorded screencast, not a live demo. In the foreground on the booth table, you can see a few adorable knitted Konqui plushes, which come from la Fabrica de Miritich. I'm happy to report that all of the Konquis were adopted by FOSDEM attendees (including one attendee who was wielding a big rubber T-Rex -- I was told it was a friendly Rex and of course Konqui is a dragon and can hold their own).

So, until next year in Brussels (or sooner, at Akademy or elsewhere).