Whenever I see a post about community growth or participation -- like Tomasz Canabrava's most recent "From Nothing to top 20 contributors of Konsole in Less Than a Month" -- I reach for the toolkit written by Kevin Ottens, because that makes it easy to obtain good numbers and graphs for community measurement. 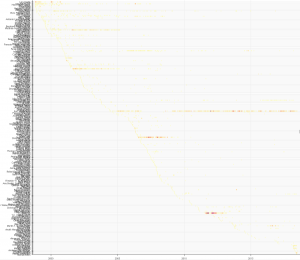 Looking at the graph (click to enlarge, but it's still hardly readable -- I'd suggest using Kevin's tooling directly if you want to zoom in or experiment) of Konsole development since the very beginning shows a few striking facts:

Of personal interest to me is that in 2002 I contributed to Konsole for FreeBSD compatibility, and in 2009 for OpenSolaris compatibility, but nothing else in the history of the project. And Konsole spent a year licensed as Artistic, rather than the GPL2-or-later, in 1999. 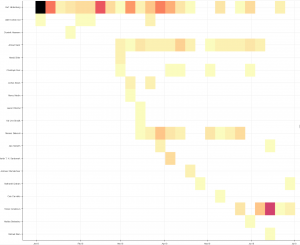 Recently, you can definitely see that Tomaz has been really active, and Kurt has slightly more quiet time. But Ahmad and Mariusz are also consistently putting in work, albeit with a lower rate of commits. Judging by the commit messages, those have gone through Phabricator. That means that their commit counts are reduced because arc squashes commits (just like Tomaz, and as pointed out by Eike elsewhere). Keep in mind that commit-counts are poor proxies for contributions -- that's something we've been saying for years and years.

Also of interest in the history: there are 1090 commits by people not in the top-twenty; if those were grouped together they would hold second place!

So, thanks Tomaz for being noisy about what you're doing. I think we need more of the "hey, I can improve the world" kind of noise -- like KDE's GSoC stories as well. And also, thanks Kurt and KDE community for being consistent and productive in small amounts for many years.