Recently a KDE neon image for the Pinebook was announced. There is a new image, with a handful of fixes, which the KDE Plasma team has been working on over the past week and a half. 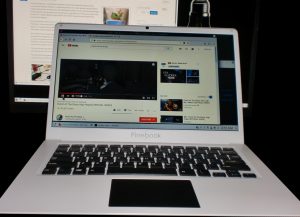 Here's a picture of my Pinebook running KDE neon -- watching Panic! At the Disco's High Hopes -- sitting in front of my monitor that's hooked up to one of my openSUSE systems. There are still some errata, and watching video sucks up battery, but for hacking on documentation from my hammock in the garden, or doing IRC meetings it's a really nice machine.

But one of the neat things about running KDE neon off of an SD card on the Pinebook is that it's portable -- that SD card can move around. So let's talk about multiboot in the sense of "booting the same OS storage medium in different hardware units" rather than "booting different OS from a medium in a single hardware unit". On these little ARM boards, u-boot does all the heavy lifting early in the boot process. So to re-use the KDE neon Pinebook image on another ARM board, the u-boot blocks need to be replaced.

I have the u-boot from a Pine64 image (I forget what) lying around, 1015 blocks of 1024 bytes, which I can dd over the u-boot blocks on the SD card, dd bs=1k conv=notrunc,sync if=uboot.img of=/dev/da0 seek=8, and then the same SD card, with the filesystem and data from the Pinebook, will boot on the Pine64 board. Of course, to move the SD card back again, I need to restore the Pinebook u-boot blocks.

Here's a picture of my Pineboard (the base is a piece of the garden fence, it's Douglas pine, with 4mm threaded rods acting as the corner posts for my Pine64 mini-rack), with power and network and a serial console attached, along with the serial console output of the same.

The nice thing here is that the same software stack runs on the Pine64 but then has a wired network -- which in turn means that if I switch on the other boards in that mini-rack, I've got a distcc-capable cluster for fast development, and vast NFS storage (served from ZFS on my FreeBSD machines) for source. I can develop in a high(er) powered environment, and then swap the card around into the Pinebook for testing-on-the-go.

So to sum up: you can multiboot the KDE neon Pinebook image on other Pine64 hardware (i.e. the Pine64 board). To do so, you need to swap around u-boot blocks. The blocks can be picked out of an image built for each board, and then a particular image (e.g. the latest KDE neon Pinebook) can be run on either board.