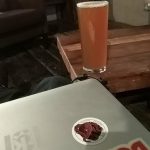 Slimbook and a pint of Cider

The weekend of 3 and 4 November Dave and I went to staff the KDE booth at Freenode#live, in Bristol. I had never been in that corner of England before, It turns out to have hills, and a river, and tides. Often an event brings me to a city, and then out, without seeing much of it. This time I traveled in early and left late the day after the event so I had some time to wander around, and it was quite worthwhile.

Turns out there is quite a lot of cider available, and the barman gave me an extensive education on the history of cider and a bit on apple cultivation when I asked about it. Sitting down with a Slimbook and a pint can be quite productive; I got some Calamares fixes done before the conference. 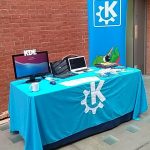 Our stand, before visitors arrived

We (as in the KDE community) have invested into getting booth materials ready for this kind of events, so we quickly had Konqui peeking at visitors and Plasma running on a range of devices (no Power9 this week, though). Dave had 3D-printed a KDE logo we stuck to the top of the monitor, and had a pile of leaflets and stickers (KDE, neon, Krita, GCompris, and some Wiki To Learn) to hand out.

Next to our stand was MineTest, with a demo and they sat hacking at the code of the game for most of the weekend. On the other side, Freenode themselves were handing our IRC.horse stickers and other goodies. 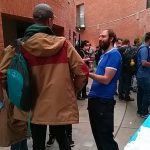 A conference booth isn't just about giving away goodies, though, and we spent the weekend, 9-to-5, talking with people about the KDE community and its software products. Plasma could be seen -- and played with -- on the machines we had at hand, and we did some small application demo's. As usual, people told us they used i3 -- and our response as usual is that Free Software on the desktop is better than non-free software. Some people had last used KDE in 2010 or so, so we could show how the different parts now operate independently and more flexibly -- and how Plasma is now pretty darn lightweight.

Here in the photo is Dave extolling the virtues of something. (I've edited the photo to make some people in the background un-recognizable by pasting Dave's eyeball over their faces -- I forgot to ask permission to post) 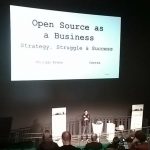 .. and a conference isn't just about the booths and vendor stands, either. It's about the talks. Here's one I sat in on about business models and how licensing affects the available models (in particular with reference to recent license changes in some projects). The KDE community is interesting because it's not one-community-one-company like a lot that I see. We have a collection of small and medium companies building on, and building with, the KDE community's software products. I think that's healthy and generally happy. No licensing gotcha's for us when using Qt under the LGPL version 2.1 and KDE's Frameworks also under the LGPL.

Two talks I would like to single out are Leslie Hawthorn and VM Brasseur, (those are YouTube links). Neither are technical talks, but social talks, about what we (as Free Software contributors) do and why, and social issues we all face -- and how to bring Software Freedom to more people.

A concept I didn't know existed was platform shaming. See above: there's lots of ways to use Free Software from the KDE community, in combination with i3, or on Windows, and on Free Software operating systems. Those are all OK. 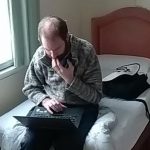 I'd like to thank Dave for being a great booth- room- and dinner-mate, and Christel and the Freenode#live crew for a wonderful well-organized weekend. Not to mention the speakers and attendees who made it a happy and instructive time.