In 2009, I was on the board of KDE e.V. and did this drawing of the members of the board back then. Can you guess who is who? 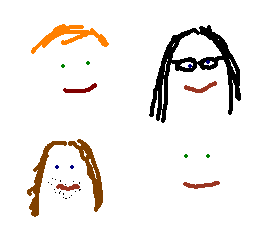 In 2019, I am on the board of KDE e.V. again and did this drawing of the members of the board right now. Can you tell that my kolourpaint skills are still excellent? 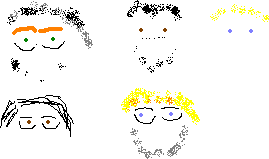 That’s Neofytos (I’m not really happy that it looks like he has orange eyebrows, but I tried to indicate that he has a pretty hip pair of glasses), Aleix, Eike, Lydia and myself. We spent more than thirty hours over this past weekend working on board things.

One floor down, the KDE Frameworks 6 sprint was happening 1 2 3 4 5, which was moving post-its around at a furious pace and innovated with a virtual David Faure. One of the things the board talked about was equipment to support telepresence at sprints. That’s what the KDE e.V. is for – to support the community in doing good things – and so we’re thinking about good was to help the community while keeping our travel footprint small(er).

If you have a telepresence idea (e.g. a monitor and a rock64 and a nice room-microphone) and can make it work, do let us know.

Other topics were finances, events, people, places and things. That’s not very specific because this blog entry is a public thing and some of what the board works on is sensitive. Reports are sent to the membership of KDE e.V. on a regular basis. But here’s some non-sensitive examples:

Some of the things we talked about were KDE beer mats, which Kai Uwe put together for Qt World Summit. They’re amazing, and you can find them on the promo-materials page that he has also been putting together.

A place that was mentioned was Barcelona, which is where the Linux App Summit recently happened – supported by KDE – for the good of the entire ecosystem. There was a restaurant called Barcelona just across the road from the hotel in Berlin, but I did not dare visit it.

People are a sensitive topic, but for some reason I ended up looking up Edsger Dijkstra, so I’ll list him as the example person for this board get-together. Or I could list the people of the board, who do wildly different things during the rest of the week and come together like Power Rangers for meetings.

The meat (or vegetables, or staple carbohydrate, whichever you feel is most important in a meal) of KDE e.V.’s work is events. Upcoming we have FOSDEM and various sprints. Plasma Mobile and KDE Frameworks 6, for instance, or KDE PIM (a yearly tradition). None of them have dates finalized though, so they’re not on the calendar yet. Any part of KDE can organize a sprint; if getting together is the right thing to do then there’s a sprint policy to help you put one together.

Finances are boring to me. Lydia had a 100-yen coin left over from a recent trip. It was shiny.

So that’s the kind of stuff we worked on! It will inform and steer what KDE e.V. does over next few months, and we’ll probably get together after FOSDEM again.