I have two screenshot applications installed – KSnip and Spectacle – because they offer different, and independently useful, functionality. Here’s some notes on what each does well.

Spectacle has been in the FreeBSD ports collection for some time now, since it ships as part of the KDE release service.

KSnip was recently added to the FreeBSD ports collection: we already had KColorPicker as a dependency for Spectacle, so packaging up the rest of the stack from Damir was a natural next-step.

The biggest reason I have for KSnip is the multiple-screenshots-in-tabs feature it has. Like any other document reader, it has tabs and you can switch between them relatively quickly. I use this particularly for keeping track of visual changes while developing Calamares: by screenshotting the Calamares window repeatedly, I can see what changes (for instance, while doing screen-margin tweaks for mobile). 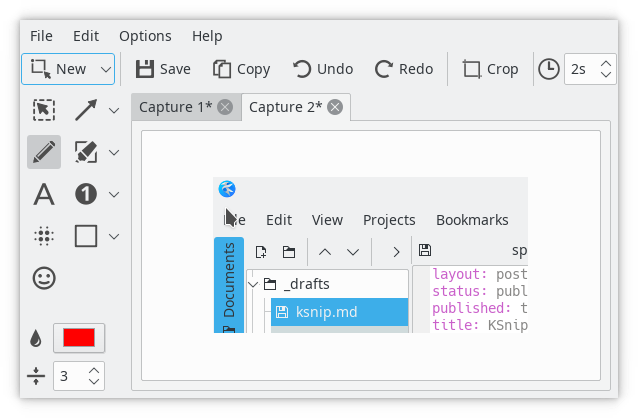 Switching back-and-forth between the tabs gives me a “pixels moved” sense, and that’s really useful. KSnip’s wide selection of annotation tools – it’s nearly a specialized drawing application – helps, too: I tell people to draw big red arrows on screenshots pointing to problems (because describing things is difficult, and a glaring visual glitch to you may be totally invisible to me).

With KSnip, adding detail to a screenshot is child’s play.

That’s not to say that KSnip doesn’t have its issues. But a blog post is not a place to complaing about someone else’s Free Software: the issue tracker is (with constructive bug reports, not complaints).

Spectacle on the other hand integrates more nicely with my Plasma desktop on the whole, can screenshot pop-ups and tooltips and understands weird screen geometry. 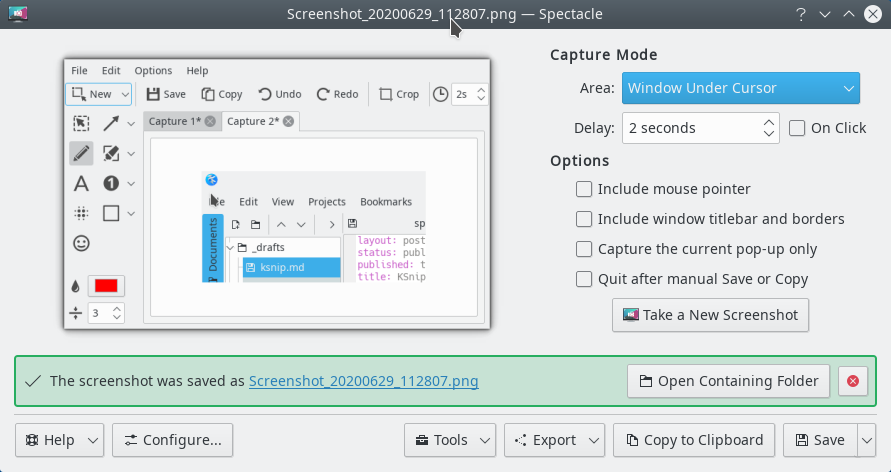 I end up using Spectacle more for the “quick screenshot needed” part of writing blogs, and sometimes for sharing bits of screen where no annotations are needed.

With Spectacle, delivering or sharing the screenshot is simple.

Overall, I like having two applications that each do their own thing, and do their thing pretty well. Since the shared code stack is enormous, each of the two applications is only small: less than 1MB. That’s a small price for specialization.