Yesterday at the NLUUG conference I picked up a Solaris 11 Express CD in a nice brownish CD sleeve (I say "nice" because it feels and looks different from the generic white sleeves). Here's a scan of the back of the sleeve, with a big sticker over the flap (click on image for a larger, readable version). 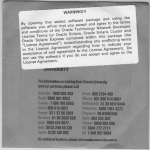 I thought shrink-wrap licenses went out with Disco, or something like that?

A little searching gets me to the license text so I can read it before opening the package to get at the license itself. The one saving grace is that the license condition is "opening this sealed software package and using the software" (emphasis mine) so it's not classic shrink-wrap.

In classic fashion, though, I can't give away this CD to someone else, not even if they want to use it to develop or demonstrate an application on Oracle Solaris.

If we turn to the license text itself, the section on "Open Source Software" rubs me in every possible wrong way, starting from the definition

We've been keeping Qt on Solaris (with Sun Studio) going for three years now. That has led to many patches in the compiler, many in WebKit, and most of the time we've got a good working relationship with upstream (i.e. Nokia / QDF). I still think we can deliver a Qt suitable for other applications' use (maybe not VirtualBox, but that's still dreamable). Now the Qt modules maturity list shows that Solaris (along with the proprietary UNIXes that still exist; remember at some point Solaris distinguished itself from those by being reasonably-almost-open) is "done". Needs new maintainer. That bodes ill from an upstream-support perspective.

Note about the compiler: you can't get patches (beyond the released 12.2 version) without a support contract, as far as I can tell. So there's no easy way to get a version of Sun's C++ compiler that has all of the bug fixes prompted by the KDE4-Solaris project. The partly-patched version I still have on my Solaris machines is falling behind, so that I can't even compile all the stuff I'm trying to package. This is one of the reasons the KDE4-Solaris project is looking hard at both gcc and Pathscale.